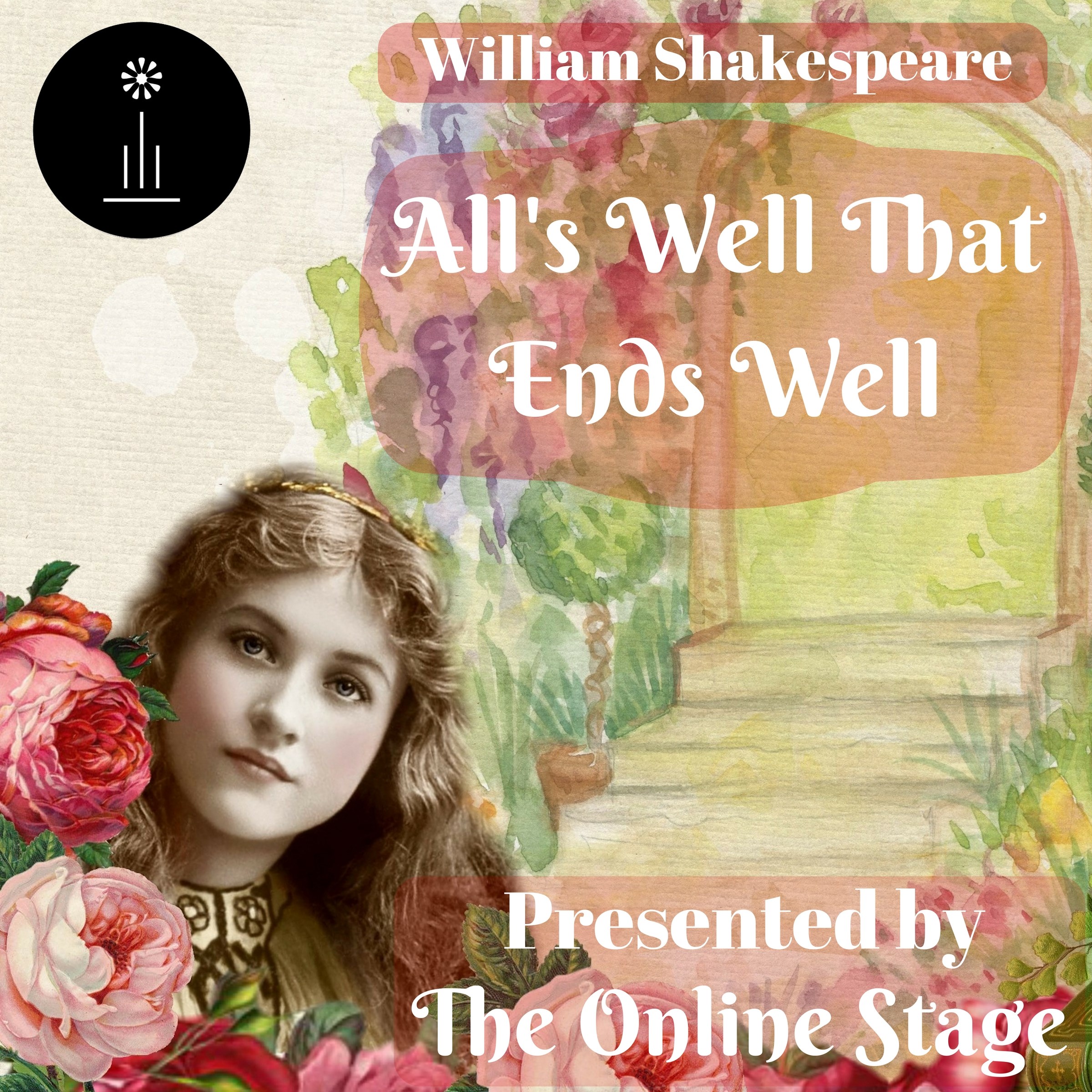 All’s Well That Ends Well
by William Shakespeare
Presented by the Online Stage
Probably written about 1605 and first published in the First Folio of 1623,  All’s Well That Ends Well is a twisted tale of courtly love.  In its setting and treatment of the subject,  the play bears a passing resemblance to Love’s Labour’s Lost,  but is in fact much grimmer,  and at the end, it remains unclear whether repentance and true love have really triumphed.
The story is based on Tale 9 of Day Three in the Decameron by Giovanni Boccaccio.  A much earlier version of the story can be found in The Recognition of Śakuntalā  by the ancient Indian dramatist Kalidasa.  Shakespeare augments the action surrounding the wooing of the unwilling Bertram by Helen by the addition of a subplot involving the unmasking of Parolles, a pretentious and cowardly associate of Bertram.
This play was originally classified as a comedy, but some scholars have redefined it as a “problem” play, because of unresolved dilemmas it presents.
Cast
Helen:  Cate Barratt
Bertram:  Ron Altman
Fool:  Brian Mansi
Parolles:  Andy Harrington
King of France:  Andrew Coleman
Lefew:  David Prickett
First Lord:  John Burlinson
Second Lord:  Ben Lindsey-Clark
Widow: Jennifer Fournier
Diana: Elizabeth Klett
Page, First Gentleman, Servant, Second Soldier:  K.G.Cross
Steward, Second Gentleman:  Alan Weyman
First Soldier, First Gentleman, Duke:  Norman Elfer
Countess, Mariana:  Michele Eaton
Stage directions read by Denis Daly
Audio edited by Denis Daly
Cover design by Denis Daly
The script for this recording was kindly provided by Folger Digital Texts.
This recording may be freely downloaded and distributed, as long as the Online Stage is credited as the author.  It may not be used for commercial purposes or distributed in an edited or remixed form.
The Online Stage is collective of narrators and actors who have come together to present productions of classic dramatic works in audio format.  For further information about The Online Stage or to explore our catalogue please visit:
The Online Stage

Uploaded by The Online Stage on February 4, 2017